Selective listening is the intention to tune in to input in a way that makes the listening experience more focused and more “efficient” – that is, more directly serving the listener’s goals.  Listen to as little as possible, use as little energy as possible, in order to “get it.”

In many academic and professional settings, and in a number of “social transactional” settings (such as ordering food in a restaurant), selective listening is an essential skill for getting things done easily and avoiding distractions.

However, selective listening is not always a good skill to practice, particularly in situations where we are trying to become aware of factors and cues about a person

In fact, in couples therapy, engaging in selective listening is often seen as a relationship enemy. (“You never listen to me!” is a common complaint among couples.)  Selective listening to some cues – and therefore selective “ignoring” of other cues – may be the easiest way to start a fight with your significant other. We’re all guilty of it. For example, I listen to what my partner says and assume I understand what she means.  And often this is not understanding in a positive way.

This type of misunderstanding typically stems from the fact that I am not listening intensively. I am hearing what I want to hear and tuning out everything else. This causes me to build my own version of the entire conversation quickly (quick comprehension is the goal of selective listening!), and it usually isn’t accurate, and certainly it’s not complete. I’ often heard my mother joke that my father had selective listening (“He only hears what he wants to hear.”), but I know that it’s a common problem in relationships, and the culprit is more often than not a man.

Why can selective listening be problematic?

Selective listening, or selective attention, is a psychological strategy of anticipation, effectively to intend to see only what we want to see and hear only what we want to hear. It’s a type of mental filtering device in which we tune out input, such as someone’s opinions or ideas when they don’t support what we know or what we believe.

This isn’t a bad habit or an intentionally rude behavior. It’s a kind of avoidance strategy, or even a survival strategy: the listener doesn’t want to admit to a vulnerability or an area of ignorance and doesn’t want to submit to a possible confrontation. That potential exploration of the cause of the vulnerability or the cause of the confrontation is the real reason we often stop hearing what someone has to say. We’ve already decided they’re wrong because we are right. Or we’ve already decided we know what they want to say or want us to believe, because we’ve decided that we’ve heard it all before.

Even if we are fully aware of it, our natural tendency is toward selectively listening. Behavioral scientists have shown that our brains are able to determine which conversations to tune out, no matter how many are happening around us simultaneously, and which conversations to focus on.  (This is called the “cocktail party effect.”)

Selective Listening Can Make You Close- Minded and Undermine Relationships

Though choosing not to hear, say a request to take out the garbage can seem inconsequential, ongoing unconscious selective listening as a whole is a big deal for a person and for a relationship. It completely closes you off to accepting, or even entertaining, different ideas. This close-minded orientation ultimately impacts the things you may choose to believe and become able to learn, and the joy you could experience from the beauty of diversity.

Perhaps worse, on a personal level, your partner who is sick of you “not hearing” them ask you to do something simple like take out the trash may not stick around to see what else about their communication intentions you ignore. Relationships only work if communication is strong in both directions, on a consistent basis. And selective hearing, by definition,  makes it hard to understand the needs and wants of others. In fact, some people may view your refusal to truly listen as a sign that you are manipulating or dominating the relationship and making it completely one-sided. Sayonara!

When You Recall the Memory of Not Being Listened to, You’ll Know Why You Need a Change

Acknowledging that you may sometimes indulge in unintentional selective listening is not enough to change an ingrained behavior pattern — you have to decide that you want to be a better partner or friend or colleague or neighbor. Think about the last time it was clear to you that the person you were talking to had no interest in what you were saying. It was apparent that they didn’t want to hear what you had to say, and even if they were nodding their head, your words were going in one ear and out the other.

Why do you think that person was tuning you out? Was it the timing or pattern of the conversation? Were you interrupting something important they were engaged in? Was it an emotionally-charged conversation in which you knew the other person would have conflicting views?

Then think about how that conversation has affected every conversation you’ve had with that person after the selective listening experience. Has it changed how you communicate? Or how serious you take them?  It’s important to politely ask that person to be open to what you’re saying, but to emphasize that they don’t have to agree with you.

Listening Isn’t just About Your Ears But Also Your Mindset

Choosing to be less selective in your listening does not mean you have to be less selective in your opinions or that you need to repress your own ideas. Instead, it’s a matter of welcoming in differing opinions and allowing yourself to consider them in a fresh way, without judging if they are “right” (that is, like yours) or “wrong” (not like yours). Even if the end result of the interaction is the same — you do end up in conflict with your conversation partner  — that’s OK. What matters is that you actively listened and made a decision after hearing them out (paraphrasing and clarifying, etc.). Imagine the impact that could have on your communication with everyone you encounter.

Go easy on yourself! And on others!

Like most of us, you may not have realized that you often do listen selectively. And you may not have realized that this form of listening  can negatively affect your relationships. So, be patient with yourself – it may take time and “deliberate practice” to make this new type of listening part of your repertoire. And be patient with those around you as they try to be more self-aware, too. 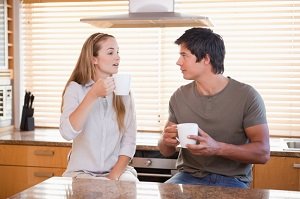 vamtam-theme-circle-post
 Category Social Listening
We were all taught at home and at school to “pay attention”. OK, yes, that...
Read More

Note-taking as a selective listening skillWhat is Selective Listening?